Retail sales growth in April will be lower than experienced historically but will be up year-on-year, a new monthly forecasting service for Retail Week subscribers reveals. 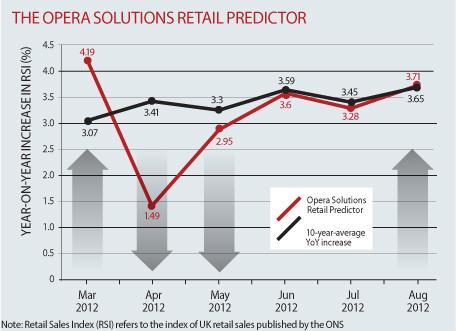 April’s rise will follow what is expected to be a strong March, when revenues are forecast to be up 4.2% year-on-year compared to a 10-year average of 3.1%.The data comes from the Opera Solutions Retail Predictor, a monthly analysis in partnership with Retail Week.

Opera executive director and Europe lead Ray Eitel-Porter said the Predictor will be useful in informing short-term tactical decision-making, such as stock clearance, and medium-term decisions including ordering.

Eitel-Porter said retailers should not be disheartened by the apparently poor outlook for April because year-on-year comparisons have had an effect.

The Predictor has been created using data ranging from the price of gold to the timing of Ramadan, and back-tested against ONS numbers over a 24- month period. The results showed an average error margin on the one-month forecast of 1%.

When tested to make real forecasts for December 2011 and January 2012, the predictions were just 0.1% and 0.3% off the eventual ONS numbers.