Opinion: Sergio Bucher straps in for day one at Debenhams

When Sergio Bucher was named Debenhams’ new boss in May, the UK felt like a different place. 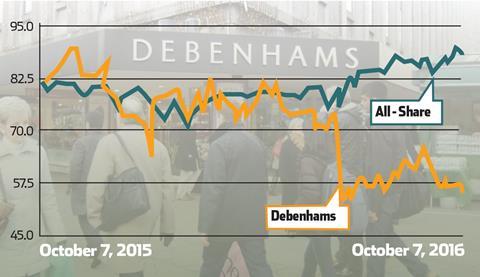 The EU referendum had yet to happen and David Cameron was still Prime Minister.

Fast-forward five months and Britain is heading for Brexit, new premier Theresa May’s government is talking tough on business and immigration, and the pound is in meltdown.

Undoubtedly, Swiss-Spanish Bucher, who already had a tricky-looking job on his hands, has an even tougher one now as he takes the reins next week.

For a start, fluctuations in the pound since Brexit have hurt Debenhams’ share price. Like many clothing retailers, it is affected by currency shifts as it sources a significant proportion of its goods in dollars, although it is hedged for around 18 months – longer than some other retailers.

Tellingly it was among the biggest retail fallers following last week’s “flash crash”, though it did not suffer as much as rival Next.

Aside from foreign currency concerns, Bucher, formerly Amazon’s head of fashion across Europe, has plenty to occupy him.

As Investec analyst Kate Calvert says, Debenhams is a “structurally challenged business operating in the middle market”. The middle market can be tough and retailers need to differentiate.

The collapse of BHS earlier this year laid bare how tough it can be for retailers that do not move with the times or find their niche.

While rival M&S is reportedly eyeing store closures, this may not be an option for Debenhams. The average lease length of its 165 UK stores is around 22 years, compared with an average of seven or eight for Next

Calvert says the retailer should “invest heavily” in its fashion offer to differentiate itself. “It needs to make itself stand out,” she says.

In an already saturated mid-market fashion sector, suffering from freakish weather patterns, this is no easy task. But here Bucher could have the edge as he has previously worked at fashion brands such as Puma and Nike.

Against that need to invest there are some big cost pressures, including the living wage and the apprenticeship levy, as well as currency impacts.

Property costs are a worry too.

While rival Marks & Spencer is reportedly eyeing store closures, this may not be an option for Debenhams. The average lease length of its 165 UK stores is around 22 years, compared with an average of seven or eight for Next.

Potential bright spots for Bucher to focus on though are Debenhams’ beauty range and its food offer, such as Ed’s Easy Diner, designed to entice younger customers.

The UK is likely to be Bucher’s key focus because that is where Debenhams bags the majority of its profits.

However, chairman Sir Ian Cheshire has talked of creating a ‘new Debenhams’ with the aim to be a “leading international multichannel retailer”. And this is where Bucher’s etail experience at Amazon should be key.

Debenhams is expanding its global horizons with a planned launch in Australia, and Bucher’s acumen around operating in foreign markets will be vital.

The fact that Bucher is a relative outsider will mean he should bring a fresh perspective to the business. He is likely to challenge conventional ways of doing things, which is exactly what the business needs.

But as some observers ask how the department store model fits into a global multichannel retail world, Bucher must work out quickly where his Debenhams goes in that jigsaw.