Burberry has launched an interactive booth at its flagship store that lets shoppers appear in an individual version of the brand’s Christmas ad.

Powered by Google, the Burberry Booth uses real-time video technology to enable customers to star alongside celebrities such as Rosie Huntington-Whiteley, Toby Huntington-Whiteley, James Bay, Romeo Beckham and Naomi Campbell in a 15-second version of the brand’s campaign, which was directed by Burberry chief creative and chief executive officer Christopher Bailey. 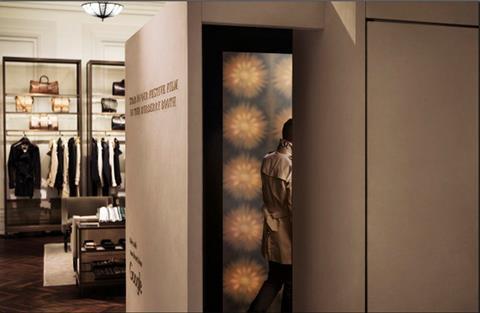 Customers are then sent a copy of the clip which they can share on social media and watch on YouTube. Each clip is accompanied by the soundtrack, ‘Cosmic Dancer’ by T Rex.

The booth is located at its 121 Regent Street store until December 24.

The brand has also released a short film on YouTube of its festive campaign in which the cast talk about how the film for the Billy Elliot-inspired campaign was made.

In its latest results, the British brand’s pre-tax profits increased by 9% to £155m for the six months ending September 30, while revenue remained unchanged year on year at £1.1bn.