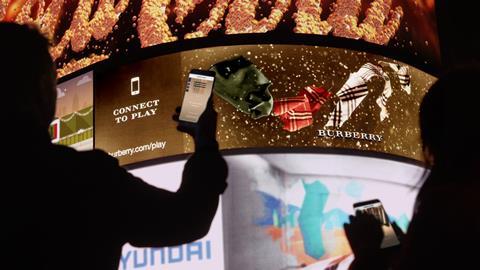 Burberry has launched an interactive campaign that sees the brand take over the advertising screens at London’s Piccadilly Circus.

The luxury fashion retailer has tied up with film studio DreamWorks Animation in a bid to engage shoppers using 3D technology.

The initiative allows shoppers passing by the famous screens to design their own Burberry scarf.

Up to five passersby at a time will be able to browse Burberry’s scarf range on their smartphones and monogram their favourite before having it beamed on to the curved screen at Piccadilly Circus. Users can then fly the scarf around directed by the motion of their phone.

Participating customers will then be able to buy the scarf on the Burberry website or be directed to the Regent Street flagship.

Burberry chief creative and chief executive Christopher Bailey said: “DreamWorks Animation is peerless in the work that it has done on the big screen in so many stunning films. They have constantly pushed the boundaries of what is possible in digital animation and with their latest Nova platform we have been able to partner with them to create something really beautiful and engaging for our customers.”

The experience launched today and will run for 24 hours a day until the December 31.

Burberry regularly uses technology in a bid to engage with its shoppers. Just last month the retailer launched an interactive booth at its flagship store that lets shoppers appear in a personalised version of the company’s Christmas ad.

Powered by Google, the Burberry Booth uses real-time video technology to enable customers to star alongside celebrities such as Rosie Huntington-Whiteley, Toby Huntington-Whiteley, James Bay, Romeo Beckham and Naomi Campbell in a 15-second version of the brand’s campaign, which was directed by Bailey.