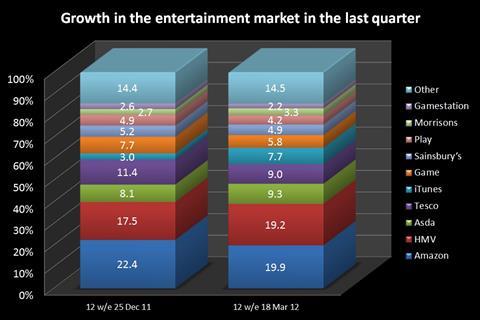 Growth in the entertainment market in the last quarter 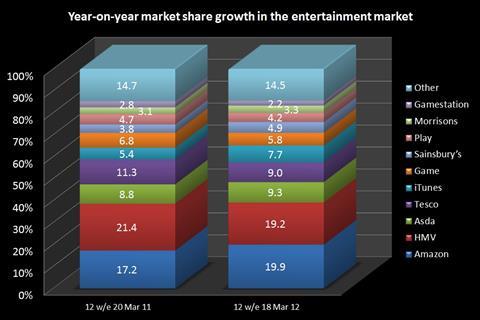 HMV is catching up on Amazon in the battle for entertainment market share.

Amazon remains on top in terms of year-on-year growth, recording a 2.7% increase in market share from 17.2% last year to 19.9% this, according to Kantar Worldpanel data released today.

Kantar Worldpanel consumer research manager Craig Armer said: “The retail sector had a rocky start to 2012 with the bad weather taking its toll on retail footfall.

“This industry-wide trend has affected spend on entertainment products with sales down by 14.8% compared with the same period last year.  The games market is the driving force here and has seen one million fewer buyers than it did twelve months ago.

The data will not reflect the closure of shops by Game until next quarter.

Armer adds: “Now in the top five entertainment retailers, iTunes has seen a 2.3% rise on last year. Digital music is becoming more favorable among consumers and iTunes continues to dominate the market despite increased competition from Amazon.

“Its position was strengthened this quarter with strong sales of Lana Del Ray’s newly released album Born To Die.  Adele’s 21 also saw another boost in sales following her recent success at the Brits.”

The table below shows growth in the entertainment market in the last quarter:

The table below shows year-on-year market share growth in the entertainment market: