Consumer 2018: Will confidence continue to fall? 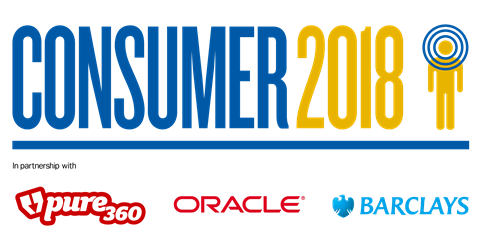 Will the consumer continue to feel downbeat in 2018? The results of Retail Week’s consumer survey suggests so.

We asked 2,000 consumers how confident they feel about the next 12 months compared with the previous 12, and only one of the six areas measured – personal happiness – was in positive territory.

People feel most pessimistic about the political situation, with 56.9% saying they feel less confident than last year, compared with just 9.6% who feel more confident.

“I think we knew that we were heading into a more difficult period for the consumer post-election, simply because of Brexit uncertainty combined with disposable real incomes having gone negative. That’s only going to get harder now”

The hung parliament result in this year’s election and the political in-fighting that ensued has provided another layer of uncertainty for consumers.

Fenwick and The Hut Group chairman Richard Pennycook said in the wake of the election: “I think we knew that we were heading into a more difficult period for the consumer post-election, simply because of Brexit uncertainty combined with disposable real incomes having gone negative. That’s only going to get harder now.

“It’s going to be a pretty tough consumer environment for the next couple of years.”

Many retailers are already feeling the impact of the volatile political situation. Sofa specialist DFS blamed the uncertainty around the election for its profit warning earlier this year.

DFS chief executive Ian Filby said at the time: “If you look at the election in 2015 or the Brexit vote, in a market like ours there tends to be some dampened demand until people are at least clear what’s happening.”

Consumers are also uncertain about the general economy, with 51.1% feeling less confident next year, compared with the 13.3% who feel more certain.

Furniture Village chief executive Peter Harrison, who reported a 22% fall in full-year EBITDA last week, says external pressures are creating a challenging trading environment and warned that the situation would “without doubt” worsen.

“The muted GDP growth prospects for the UK, as outlined in the recent autumn Budget, were a stark reminder of the combined impact of inflationary pressures and an allied reduction in real wage growth on both disposable incomes and business and consumer confidence, these factors hardly contributing to a buoyant retail market.

“Without doubt, the trading environment is set to become more challenging.” 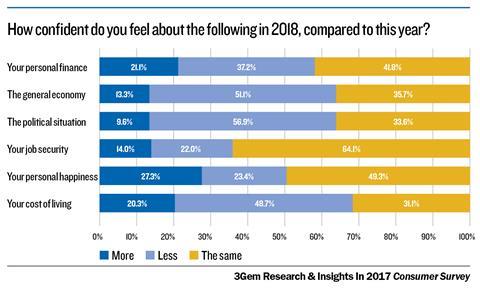 Meanwhile, 37.2% of those surveyed say they feel more confident about their personal finance, compared with 21.1% who feel less confident.

For Staton, this is particularly worrying. “Personal finance is the area we usually have control over. The fact that this is negative indicates that having enough money to pay bills is the top concern for many in the UK.”

Real wages continue to fall in the UK. Weekly earnings grew 2.2% in the three months to September, behind inflation which jumped 3% in September.

With pay packets falling, it is unsurprising that consumers are feeling pessimistic about the cost of living.

Some 48.7% feel less confident about the cost of living next year, compared with 20.3% who are more confident.

“It’s going to be a tough time for retailers. We need a dose of positive news on the horizon and I can’t see anything coming”

Low unemployment has been one of the few positives about the economy this year. The unemployment rate was 4.3% in the quarter to September, down from 4.8% a year earlier and the joint lowest since 1975.

However, that has not made people feel any more secure as uncertainty filters through all parts of life, including what purchases they make.

The latest GfK figures show that the major purchase index – which gives an indication of consumers’ propensity to buy big-ticket items – fell most dramatically, dropping six points to -3 in November.

Staton says this is evidence that shoppers are beginning to feel the pinch and cut back on their budgets.

“It’s going to be a tough time for retailers. We need a dose of positive news on the horizon and I can’t see anything coming,” he laments.

The consumer outlook for 2018 looks gloomy. Retailers will need to work harder than ever before to persuade these wary shoppers to part with their cash.