The administrators of shoe specialist Barratts Priceless will shut 18 shops on Friday with the loss of 127 jobs.

Another 43 staff at the retailer’s Bradford head office have also been made redundant.

Five Barratts shops and 13 Priceless stores will be closed. Administrator Deloitte is continuing to seek a buyer for all or part of the rest of the business as a going concern.

Barratts Priceless went into administration earlier this month, for the second time in two years. Before today’s announcement the retailer employed about 3,800 people and had 191 stores.

Joint administrator and partner in Deloitte’s restructuring services practice Daniel Butters said: : “Regrettably, we have been unable to continue to trade all of the Barratts Priceless Group stores and have had to make 127 employees across 18 stores redundant.

“In addition, a total of 43 staff were made redundant from the head office based in Bradford.  Employees in this position will be paid up until the last day of employment.”

These are the affected locations: 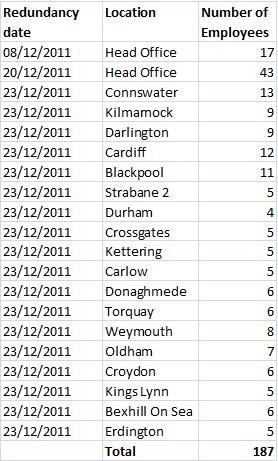