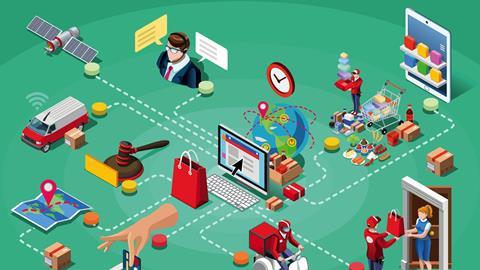 Retail 2018: The industry's blueprint for the year

How are the industry’s leaders planning for 2018? Our Retail 2018 report, in association with Manhattan Associates, provides answers from some of the sector’s most high-powered people.

The unknown impact of the UK’s decision to leave the EU hovers ominously over retail as the industry turns its attention to 2018. Major investment plans have been put in place by many of the industry’s leading companies, and there is confidence in achieving individual goals, but there is a nervousness caused by Brexit and its potential effect on the economy and consumer sentiment.

According to research from Retail Week, conducted in partnership with Manhattan Associates and involving interviews with chief executives and directors from 25 leading UK retailers, 48% of retailers think Brexit will have a major impact on consumer behaviour this year.

However, although the uncertainty caused by Brexit is taking up much of the brain space of the retail executives from companies based across the UK, the sector appears to be making significant progress in achieving some of the ambitions it laid down last year.

While just 18% of respondents claimed they had reached omnichannel status 12 months ago, this year the figure leaps to 47% – while 20% of retail leaders think they are close to reaching that point.

Defined as having a single view of stock and customers across multiple trading platforms, being omnichannel is expected to help retailers get to know their customers better and serve them more appropriately.

Creating more personalised customer experiences and interactions is at the forefront of much of what retailers are trying to achieve.

There is a common understanding that ecommerce will continue to grow as a percentage of overall retail sales in 2018, and that too is shaping many of the investment decisions executives are making for this year and beyond.

Ecommerce was cited by 60% of the business leaders as a key area for investment in 2018, followed by mobile and customer service/experience (both 52%), and employees (48%).

Conversely, international expansion has dropped down the priority list, with only 28% of retailers focused on this area. Last year, this figure was 56%.

A drop in retailers’ willingness to expand their global horizons is perhaps a result of Brexit, or simply a case of companies gauging how recently opened territories perform with the view to more international expansion further down the line.

What’s in store for retail?

Although during the second half of 2017 a number of big retailers announced store closure programmes or continued previously planned real estate reductions, including Marks & Spencer, Lloydspharmacy and Shoe Zone, the 2018 outlook for store portfolios is mixed.

Some 32% of the retailers we surveyed say they plan to invest in new stores over the coming year, while 52% say there would either be no investment in new shops or a reduction in their property portfolio.

The same question was asked to the online retailers who took part in the research, but none of them have plans to open physical space despite the high-profile entries into bricks-and-mortar retailing by many pureplays over the past 18 months.

“Retailers will clearly need to be astute, stay close to their customers and tread cautiously if they are to grow and retain shopper numbers”

Although not the case for every retailer and every region, overall footfall to stores and high streets is reducing.

For some that has triggered a change in role for the staff serving in shops, with one consumer electronics retail chief executive saying customers are now using the physical space for fewer “get missions” but more “discovery missions”.

This has resulted in staff at this particular business spending much more time talking to customers, as opposed to simply processing their purchases – and that is not an uncommon switch in function for many of the retailers involved in our research.

Plenty of references were made to the rise in coffee shop culture, growth in digital media such as Netflix and the growing interest in the wider digital economy, which are all eating a share of the time consumers used to spend shopping.

“The balance of power has swung from the retailers to the consumers and we’ve got to be very, very mindful of that”

For one fashion retailer with stores primarily in London, the lunchtime shopper has effectively become a thing of the past because of people’s lack of time and new behaviours.

In such an environment, retailers will clearly need to be astute, stay close to their customers and tread cautiously if they are to grow and retain shopper numbers.

“I think complacency and resting on your laurels is very dangerous, especially in a world where the customer is totally in charge,” says the chief executive of another fashion retail chain.

“And I think if you’re complacent, then someone will come and take your business away from you. The balance of power has swung from the retailers to the consumers and we’ve got to be very, very mindful of that.”

Discover exclusive insights about the year ahead from 25 of retail’s top leaders in our Retail 2018 report, in association with Manhattan Associates. Download it here.