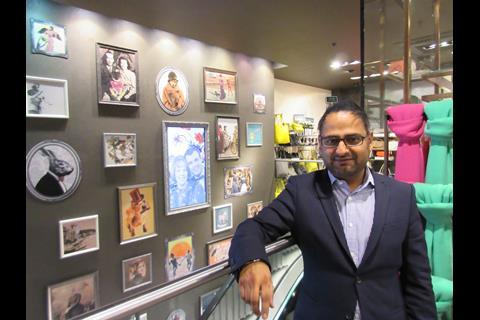 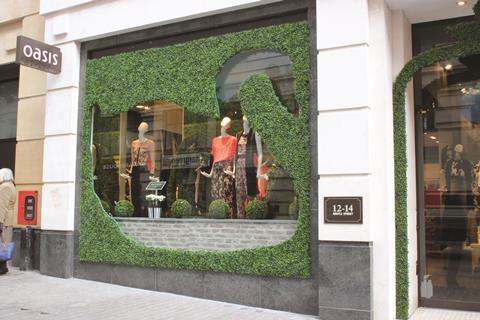 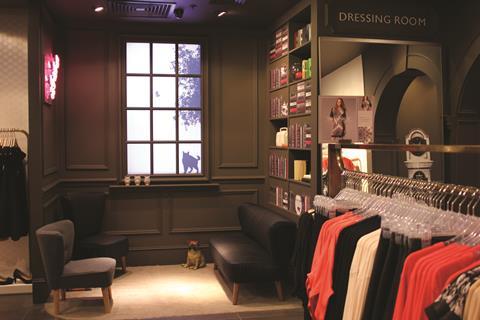 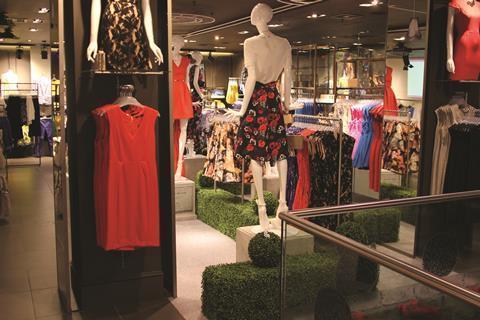 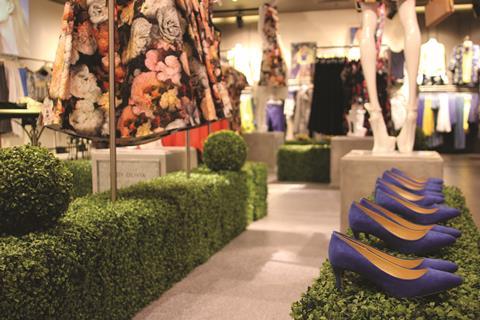 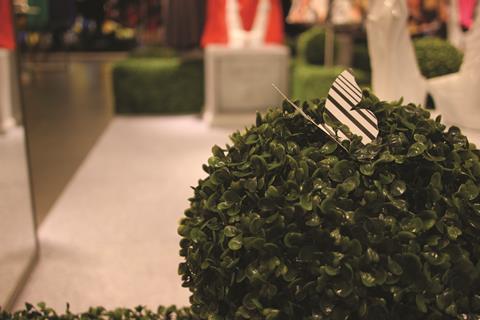 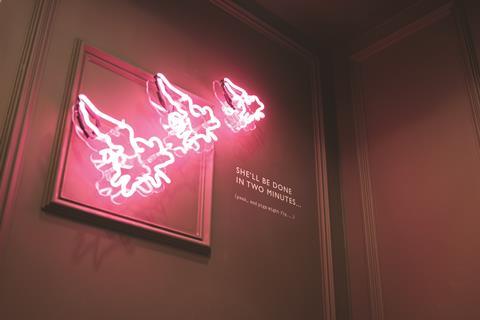 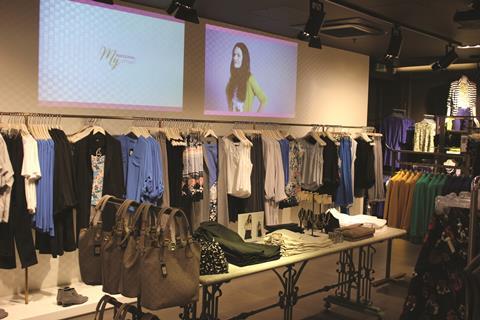 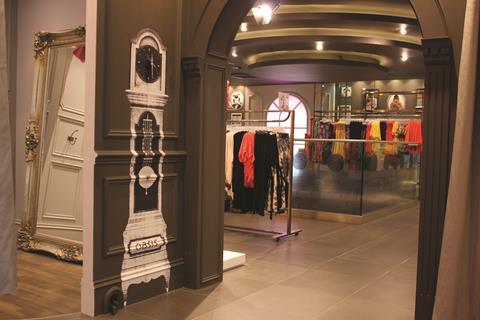 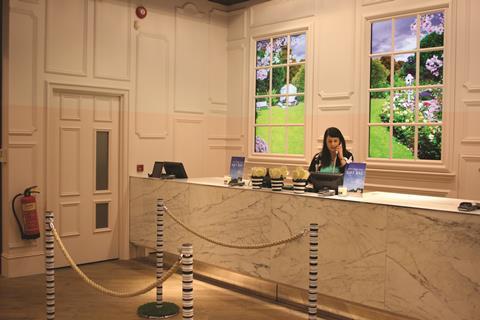 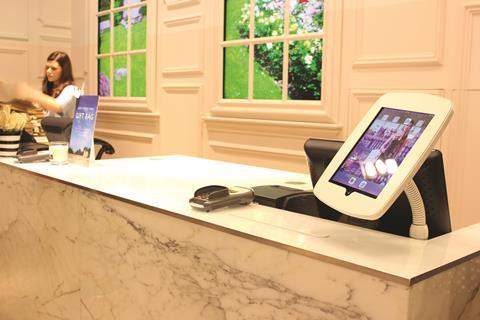 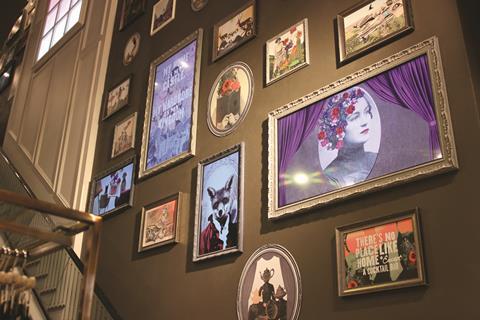 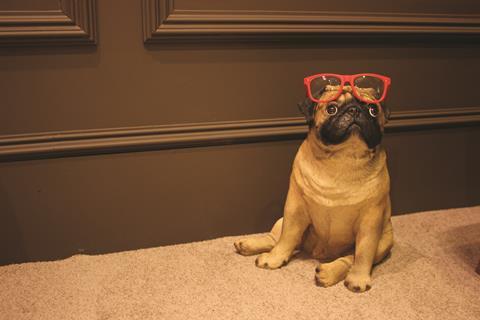 Above Ladha’s head in Oasis’s London flagship just off Oxford Street is a neon pink sign of three flying pigs with the accompanying words: “She’ll be done in two minutes… (yeah, and pigs might fly).”

We’re sat in the ‘library’, also known as the men’s waiting area by the changing rooms, which is a new addition as part of the store’s refit, which opened its doors to the public this week.

“The technology has been focused around the theatre of the store, and you know retail is an art,” says Ladha. “I like to think we bring the art to these stores and showcase the product incredibly well. And the technology element in this store has been around surprise and discovery for the customers.”

The library is one of three significant new features implemented at the Argyll Street flagship. The significant investment, Ladha says, was on the digital family tree wall behind the escalators, which features moving framed portraits – reminiscent of the walls of Harry Potter’s school, Hogwarts.

One such framed portrait is of a fox, which intermittently asks customers whether they would like a cup of tea.

And downstairs behind the cash desk Oasis has introduced windows that aim to make the customer feel they are looking out onto a meadow on a beautiful spring day with birds and animals flitting across the screen. The video – which runs on a loop – then displays looming dark clouds, which begin to unleash a downpour.

These features give the store a whimsical, quirky, British feel – “rather like the British weather”, laughs Ladha.

It has only been open two days but it is already performing well.

The last time the retailer made a major investment in design was in 2010 when it first launched its ‘House of Oasis’ concept. Since then the retailer has revamped another 10 large stores, but over the past five years the concept has evolved and more features were added, although not to its London flagship.

So as part of the recent refit, the Argyll Street flagship retrospectively rolled out existing concepts, while also launching some new innovations.

“Really importantly for us, technology is about adding to the customer experience. We are not a kiosk or self-serve brand,” says Ladha.  “All of these technologies are around simulation, and they should create talking points among customers, and that is the point of it.”

One innovation that was already in its Birmingham store, and is now available in Argyll Street, is the ability to pay for items using staff iPads in the changing rooms. That has allowed the retailer to remove the upstairs cash desk, freeing up more space to showcase products.

“I think this is a much better use of space and it does feel more boutiquey – and the big thing for us is how as a national retailer you can we feel small and boutiquey and that is the whole purpose of House of Oasis to make it a comfortable place for people to shop,” explains Ladha.

“Technology can improve the customer journey end to end and a lot of this we’re already doing, like the remote iPads that are transactional,” he says.

But Ladha does see a point in the future where customers will come to Oasis wanting to pay for products without the need of queuing or speaking to a sales assistant.

“They all have their own mobile phone, and that is something we will invest in. It works in supermarket retailing, but in fashion it’s a bit different, product needs to be detagged and bagged, so that’s not necessarily going to be an easy journey, but if it is what our customer wants, that’s what we’ll give.”

“What I don’t believe customers want is technology thrown in their face,” he says. “If you ask customers to interact with a device they’re unfamiliar with then ultimately they’ll become frustrated with it.”

Ladha also points out that the retail industry is about to face an interesting challenge when it comes to the next wave of young shoppers. “I think the consumer has fundamentally changed.

“We have a generation that is coming up to shoppable age who haven’t done anything but swipe,” he says. “You go onto an airplane and you try and pinch the screen infront of you and it doesn’t work and you think ‘that’s a really old TV.’”

But front-facing customer technologies are not cheap to implement, and Ladha says the IT costs are a big challenge for retailers and can prohibit many from taking the leap to make in-store enhancements.

“The capital you’re now spending on customer-facing technology is something you would have never done from an IT perspective 10 years ago, so you are spending a lot more money on the engagement of consumers to win their hearts and minds,” he says.

“Many years ago it was back-end stuff that was enhancing the business performance. It’s a different shift.”

But customer experience and innovation is not just about technology. Ladha takes inspiration from industries outside retail including hospitality, which he believes is making the greatest impact when it comes to customer experience.

“You go back 10 to 15 years and the hotel bar was for residents only, but now they have become destination bars, like the Hoxton Hotel in Shoreditch,” he says.

One of his favourite inspirations is when the line blurs between retail and hospitality.

“Is it a shop, is it a cafe? Actually it’s all of the above. There will be sectors that start to appear that are a bit of everything, especially in smaller boutique retailers,” says Ladha.

While space is always an issue as Oasis does not have stores with a huge footprint, Ladha says bringing a cafe into Oasis is a possibility, but only if it is done in an individual way and more importantly, if the customer wants it.

“Does it improve dwell time and add to the experience? It would be somewhere customers could get a cup of tea and a cake, but it would have to be done in a very different way, or a different take on it,” he explains.

“Shopping is a tiring game, so providing someone with a bit of respite is always nice.”